No Poaching Doesn’t Refer to Eggs Antitrust Enforcement In The Employment World Welcome Back My Old Friend!!!!

Employers and Human Resources professionals need to be alert to the fact that the Trump administration has breathed new life into an old enforcement area, and will soon be cracking down on “No Poaching” agreements between competitors. There are hundreds of ways for an employer to stumble in the employment minefield, but no one really considers antitrust issues to be on the radar. All of that is about to change!

The Sherman Antitrust Act was originally passed in 1890 during the presidency of Benjamin Harrison. It was enacted to protect trade and commerce from unlawful restraints and monopolies. It does not seek to prohibit every restraint on trade, only those that are unreasonable. As businesses grow in size and market power, we’ve seen the government step in to break up companies or their activities as unreasonably anti-competitive. Recall the break up of the phone monopoly held by what was once labeled “Ma Bell” (AT&T) or Microsoft and its browser or the famous breakup of Standard Oil into the entities we now see. There can be both civil and criminal penalties for violating the antitrust laws. After years of lying low, the antitrust laws are roaring back to snare unsuspecting business owners, and the impact will be felt within the small to medium size business environment as opposed to the mega companies.

On October 16, 2016, under the Obama administration, the Department of Justice (“DOJ”) along with the Federal Trade Commission (“FTC”) issued a joint Antitrust Guidance for Human Resources Professionals that specifically set out new enforcement priorities for businesses under the antitrust laws. Specifically, the Antitrust Guidance targets “naked agreements” among employers not to recruit employees or not to compete on employee compensation. These activities would constitute automatic violations of the antitrust laws and would not just be prosecuted civilly, but now with an emphasis on criminal prosecution. The Trump administration, in a remarkable u-turn from its business friendly stance, has signaled its intention to make criminal prosecutions of the antitrust laws in the business world a priority. On January 19, 2018, the DOJ announced that it has been “very active” in reviewing potential violations  of the antitrust laws involving agreements among employers not to compete for workers. Ominously, the DOJ has indicated that “in the coming couple of months, you will see some announcements” (relating to this action). The two most talked about areas are “No Poaching” agreements and Wage Fixing agreements.

“No Poaching” agreements are agreements  between two or more employers not to solicit each other’s employees. A No Poaching agreement merely prohibits the solicitation of employees; if an employee applies to a competitor on his or her own, without any solicitation, there is no violation. Similarly, a No Hire agreement between companies is one where one company agrees not to hire employees of the other. The DOJ considers both types of agreements as unlawful if they are “naked agreements”.

What is a “naked agreement?” It is an agreement that stands alone and does not serve any ancillary purpose. Ancillary “no poaching” or “no hire” agreements do not violate the antitrust laws if they are reasonable in scope and duration and are reasonably necessary to further the interest of a legitimate collaboration. For example, when one company buys the assets of another, it is common that the employees of the acquired company are prohibited from seeking employment with other companies in order that the purchaser could retain the skilled services of these employees. Their knowledge and skills were a part of the overall purchase price and their restriction on being hired by others is ancillary to the overall purchase agreement.

An individual likely is breaking the antitrust laws of he or she agrees with individuals at another company about employees salary or other terms and conditions of compensation, either at a specific level or within a range. These are so called Wage Fixing agreements. The most common example and area of concern is where one employer calls another and asks: “what is the going salary range for positionX?” While there may be no explicit agreement to fix wages among the companies, the DOJ will likely prosecute because it believes such discussions have a chilling effect on open competition for employees. An employer may share historical data (but not current information). Additionally, it will not be viewed as an antitrust violation to use the services of a third party that aggregates data across a wide spectrum of companies and delivers that pricing data in a masked nature so not to identify any specific company.

With over 33 years’ experience in advising employers and employees on workplace issues, including the interplay between the antitrust laws and employment practices, let Boznos Law work with you to ensure you are ready to meet the challenges posed by the changes to the employment laws. Call Bill Boznos today at (630) 375-1958 or contact us at www.boznoslawoffice.com/contact-us through our website. 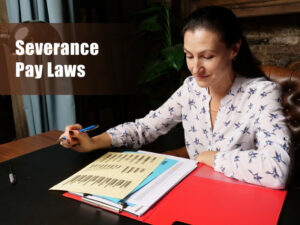 SEVERANCE PAY AND ITS RELATIONSHIP TO UNEMPLOYMENT

The interplay between severance pay and unemployment benefits can be confusing to both employers and employees. Many clients seek out the services of our law

By now, everyone is aware that on December 22, 2017, President Trump signed into law the most sweeping tax reform provisions in over 30 years

Rise of the “Nonbinary” Gender Designations in the Workplace!

Employers, how many of you are still using “M” or “F” designations on your applications, benefit forms, training materials, or throughout your handbooks? WAKE UP!

What to Expect on the Immigration Compliance Front in 2018 and beyond. Will Your Business be the Next to be Raided by ICE?